Getting into Packet Radio with a NinoTNC kit by Simon - 2E0UMS

If you are looking to get into Packet Radio then there are a lot of options. Obviously check out the Packet and Networks channel on our discord service.

If you like to self-build your kit, let me introduce the NinoTNC kit.

Ordering the kit and parts

The board and the MCP are available via Etsy - took about seven days to reach me. They also provide a bill of materials that you can import into Digikey and buy as a single package. Again, this took about a week to arrive.

If you are capable of wielding a soldering iron then this kit will present no problems. I assembled it in an evening with another few hours of testing and debugging (see my wiring saga later). Probably not the ideal first kit, but certainly within reach of the home gamer.

The provided assembly instructions are excellent and you test as you go, so its pretty easy to get it right.

My issues were around getting a suitable lead to connect my HT to the TNC. My intended use case is to make a cheap portable APRS tracker using a Raspberry Pi Zero 2W and a Baofeng.

It turns out that not all 'Baofengs' are the same. I have two cheap HTs. A Baofeng UV-5R plus, and a Wouxon KG-UV9K. Both feature the Kenwood style ear / mic combo using a 2.5mm and 3.5mm jacks.

I couldn't find a premade cable that I could get delivered to the UK (you might have better luck) so I decided to make my own. I ordered a D-Sub breakout connector that I wired up to an old hand speaker/mic that I cut the mic off to get the cable and connector. 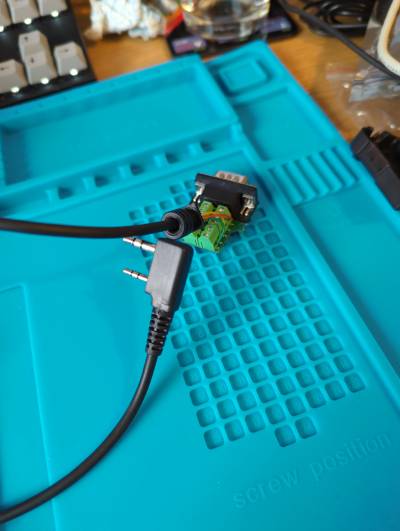 It was hard to find a pinout diagram, but with the help of OARC members, we got a working pinout. The TNC has a ‘Kantronics’ / ‘KPC’ pinout - pins 1,3,5,6 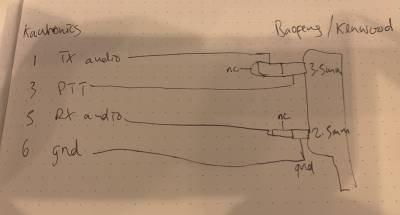 It turns out that this works well on the Baofeng, but it wouldn't trigger the PTT on my Wouxon. I'll update this page if I find the cause, or the cure!

So we have a working TNC, a cable and an HT. I tested it worked end to end by connecting my HT to a dummy load and using an APRS capable HT (Yaesu VX-8) to decode the packet. You could also use an SDR.

I used Pinpoint APRS on Windows 10 to generate a packet via serial to the TNC over USB, this then sent the packet out via the HT and my VX-8 decoded it.

Try it for yourself, its a fun little project for a few winter nights.