As someone who gets a fair amount of 'mic fright', the chance to do my first SOTA activation on a day where a bunch of lovely OARC people would also be out and active was an instant yes from me!

I'd been to Ditchling Beacon a few weeks ago to scout the area and get an idea what it might be like on the day, its a lovely area with great views and a nice big fairly flat activation area. The bus from Brighton drops you off at the car park and then its just a short walk up to the Trig Point 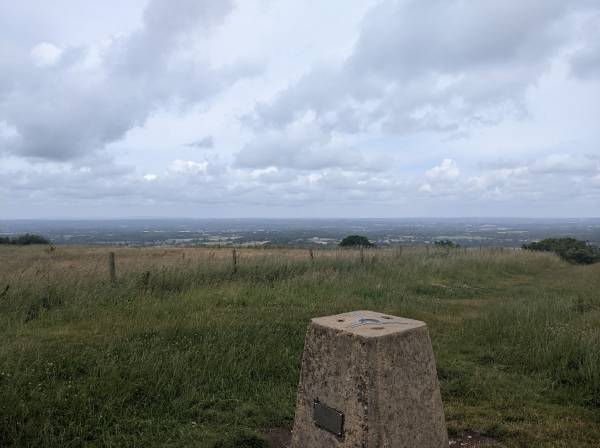 I set up camp within view of the Trig point and started getting my gear together: an Anytone 878 uv2 plus, and a backup Yaesu FT4xe, both with signal stick antennas as well as an Arrow antennas yagi.

There seemed to be a fair amount of activity on 2m when I first set up, with some stations calling CQ and others having a chat so I was hopeful for getting my 4 QSO's to get points for the summit.

By the time I was set up and had calmed my mic based nerves enough to start making some calls, everything went quiet!

I spotted myself, put out CQ calls, but had no replies! I could hear GB2FN, a special event station for Museums on the air calling CQ on 145.5 but sadly my responses to them weren't making it over.

Then, to my joy, Rich (M7GET) came back to me out of the void! We'd communicated the day before via discord so knew we were close to each other and were going to keep an ear out for each others calls, after a lovely contact on 2m we went our separate ways again to try and reach more people.

Again, without much luck for me sadly! I could almost make out Szymon (MQ6IBM) at one point, but my replies weren't making it back.

Around this point, Rich and I looped back to each other again and decided to have a go on 70cms and log a quick QSO there towards the WAOARC 'contest that's not a contest'.

After a break for lunch and some more unanswered calls, I had the idea of trying some impromptu SSTV with Rich.

A quick look on the app store gave me the apps I needed, and a quick message via discord to Rich got a very enthusiastic YES!

The outcome is a bit mixed (which I'm not too surprised at given my low-tech approach of holding my phone speaker next to my Anytone's mic while holding down the PTT!) but I'm very happy with the image I managed to get back in response, it came out great!

In the image below, the first and last images are the ones I sent as received by M7GET, and the middle is what I (G67AWK) received.

I had a great day, and am looking forward to the next one!